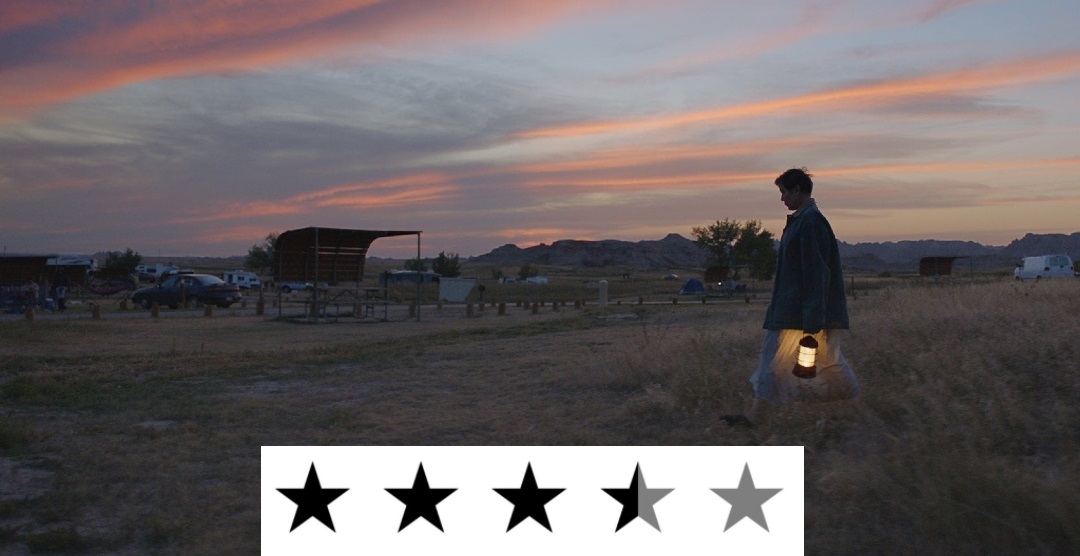 A while ago, Fern (Frances McDormand) and her husband lived in a small American town based around industry. After the local gypsum factory’s shutdown, the town practically ceased to exist. And during this painfully chaotic situation, Fern’s husband died, leaving her forlorn, jobless, houseless (as she likes to call herself). She starts living in her decrepit van while working a seasonal job to achieve the minimum level of existence. Briefly thereafter, she joins a makeshift nomad community where she meets people with a similarly devastating past but, for various reasons, have decided that such a life suits them now. When discovering this, the viewer sighs, expecting to observe the banal sad-person-finds-meaning-in-a-community narrative. After a few minutes of beautiful, nomadic languor, however, the viewer remembers that one time their grandmother asserted it’s bad to jump to conclusions.

Film historian Robert Rosenstone claims that any story, whatever its origin, embodies an assembly of events organised in a coherent plot. Put differently; a story can exist only when the viewer comprehends the narrative’s cause-and-effect links, which the author has logically assembled. Indeed, the naturalistic and unvarnished Nomadland bridges certain events into a causal relationship (e.g. the subplot with Strathairn’s character leading to the climax); however, others occur somewhat randomly, without a fixed predictor. For instance, Fern works for Amazon, then discusses her life with her neighbours, then (all of a sudden) sells rocks, then (all of a sudden) paints her van. Writer/director Chloé Zhao constructs Fern’s haphazard life inimically to Rosenstone’s notion of storytelling since her nomad life cannot be logically systematised. Fern’s purposely fragmented actions beguile the viewer while seamlessly blending in with the cause-and-effect side of the narrative. As though a person in the mountains, wandering around in Brownian motion, manages to get closer to the peak by holding onto an invisible rope.

Toward the end, however, this close-to-perfect fusion is disrupted by the script’s jerky urge to conclude the story. Zhao employs conventional dramatic enhancers to get to the climax, even though a languorous story like this loses more than it gains thereby. Consequently, the muddy road of narrative platitudes emerges, ‘asking’ Fern whether she should keep on living as a nomad, even though the viewer has discovered the answer five platitudes ago.