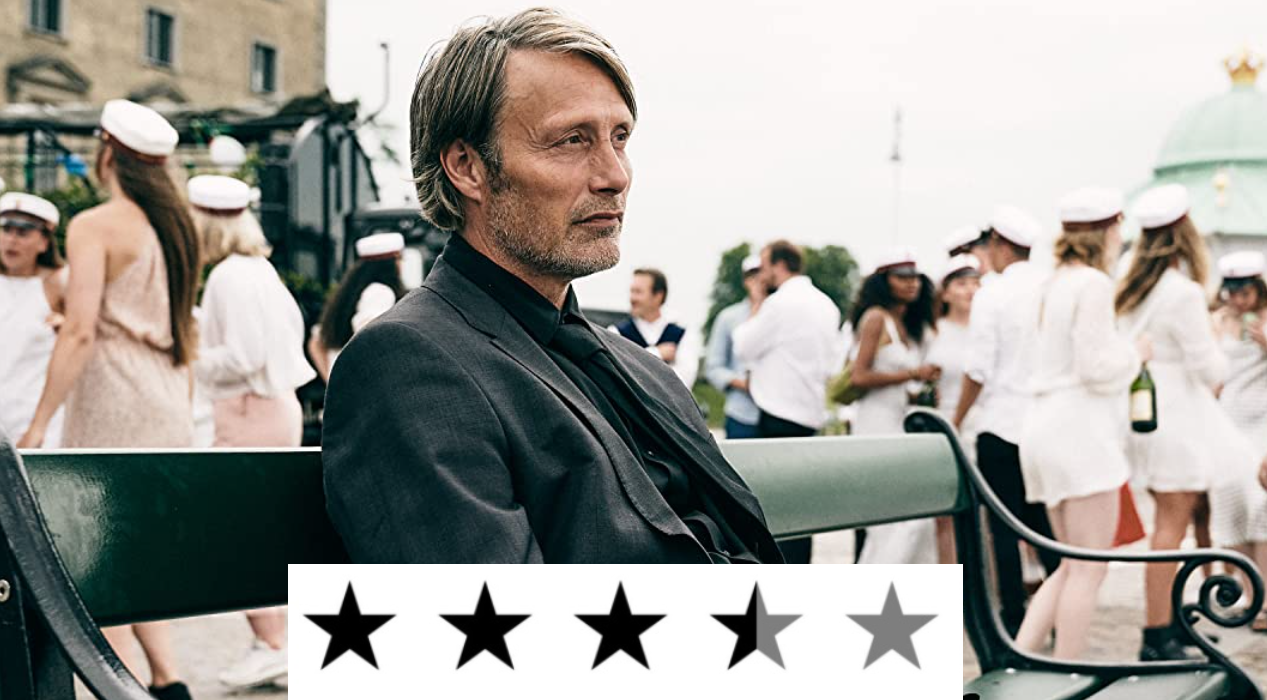 According to Norwegian philosopher Finn Skårderud’s hypothesis, human beings are born with a deficit of 0.5‰ of alcohol in their blood. In other words, humans need about two glasses of wine to feel better and get their creativity, courage and open-mindedness boosted. This is tested in the Danish Oscar contender Another Round which explores how alcohol can open up a life, but also demolish another.

Co-writer/director Thomas Vinterberg asserts in an interview that our lives are too plan-driven, goal-oriented, and there’s no room for losing control. Hence, many people vent by drinking; they either do it reasonably, or they get completely pissed. Once, during sunrise, as Vinterberg was coming back from a night out, he felt a lingering euphoria when staring at the blossoming lilacs and the blissfully emerging new day. And he’s sanguine that he wouldn’t have felt it, hadn’t he been tipsy. Because after letting go of his fears and ambitions, he was able to embrace nature and feel alive. Something that the four main characters in the film, trapped in their midlife-crisis cage, desire subconsciously. But are humans capable of governing their “tipsiness”?

Another Round introduces us to the mundane existence of four school teachers who also happen to be best friends – Martin (Mads Mikkelsen), Tommy (Thomas Bo Larsen), Nikolaj (Magnus Millang) and Peter (Lars Ranthe). With a directorial style resembling the Dogme 95 customs (e.g. handheld camera, diegetic music), Vinterberg contrasts the innately stodgy people having the midlife blues and the same people after getting juiced up. During the “boring” expositional scenes with families, teachers and parents—including a scene, where Martin asks his wife whether he has become boring while she, shot from a distance, is blurred by the shallow focus, denoting their monotonous marriage—the barely moving camera is set in unison with the edgy diegetic sounds. However, when the friends get (mildly) inebriated, they put some music on and start dancing while the flying camera joins the party. As Vinterberg calls it, the smoothness of being spirited neutralises the awkwardness of being sober and lifeless. Nevertheless, before the catalyst restaurant scene—where the quartet embraces the “spirit” life—the dramatic conflict languishes since the four mates do nothing apart from staring impassively into space. Did Vinterberg intend this effect? One can’t be sure; however, he should be aware that a 15-minute-long midlife-crisis sequence bears huge zonking-out potential.

Quite cleverly, the film employs a “cut-to-black” schema facilitating the further disclosure of narrative information; text messages, permilles, jottings, etc. appear on a black screen, resembling the notes on a classroom blackboard. This signifies the lesson that will be learned by the four teachers at the denouement. But more about that in the SPOILER section of the review below.

As the characters start testing Skårderud’s hypothesis, which initially vivifies their souls, the viewer inevitably begins to wonder whether everything will come to grief in the end. Since there can’t be any thematic progression if the characters simply maintain the 0.05‰ and never go higher, the only logical development is this: they start drinking, they have fun, but ultimately, they take it too far and less favourable things begin to happen. And that’s exactly what happens during the film’s developmental middle. Nonetheless, writers Vinterberg and Lindholm carefully intertwine another thematic concept within the predictable “everything-goes-bonkers” narrative line. During his history class, Martin talks about Hemingway and Churchill. The former, however successful, dies (more or less) due to his heavy drinking, and the hedonist Churchill—having smoked around 200,000 cigars and drunk copious amounts of wine, scotch, brandy and champagne during his lifetime—lives until he’s 90. “Would’ve Churchill been that successful as a leader during WWII, hadn’t he been drinking?” – asks Vinterberg in an interview. One will never know, but his film elegantly indicates why people like Churchill were “allowed” to live long enough to accomplish glory.

After Peter—shot from afar, dimly lit—drinks during his music lesson, we immediately expect that his students will find out or that he won’t be able to finish the lesson. However, his students start singing better than ever. The same goes for Martin, who after liquoring up, gains better control of his classroom and for the first time, his students listen to him teach in awe. Consequently, the four mates decide to increase the permilles, being cognisant of the trade-offs such as clumsier movements and words-slurring, and it’s all fun and games for a while. But, as expected, they all wreck themselves one night, and, as a result, they discontinue the experiment. Then again, the experiment has enkindled one of the friends’ alcoholism, and while sailing his boat somewhere in the Øresund strait, completely pissed, he falls in the water and drowns. Indeed, the remaining three friends deplore having launched the experiment…but do they actually? During the last scene, teachers and students celebrate the successful end of the school year with, you guessed it, copious amounts of liquor. Martin shows some impressive dance moves after deciding to honour the students’ academic success with a drink. However, for a brief moment, he becomes reluctant to continue to drink & dance, and he sits on a bench facing the Øresund strait, looking at the boats. Probably thinking of his friend who drowned there, he imagines what alcohol could do to him if he “keeps on dancing”. However, emboldened by a text his wife sends him, Martin guzzles his drink and displays the best dance a teacher has ever performed.

The critics’ opinions of the meaning of the dance are divided. Many deem it thoroughly celebratory, others (e.g. Mike D’Angelo), due to the scene being staged at the water’s edge and the final freeze-frame, see it as illuminating the bridge between freedom and oblivion. I agree with the latter; however, I don’t think Martin is on the bridge. Because of his friend’s death, he might be thinking he’s there—worried that after some joyful, alcoholically-induced moments, he might get himself killed—but Vinterberg, thematically employing the Hemingway-Churchill comparison and the juxtaposition of the characters’ traits, made me believe that Martin’s future alcoholic journey betokens freedom. Hemingway dies (partly) due to alcoholism; Churchill doesn’t. Martin’s friend dies due to alcoholism; he doesn’t. Why? Martin’s friend loses his basic morals (e.g. appears drunk in school, drinks by himself) and Martin doesn’t. According to Skårderud’s hypothesis, one mustn’t drink after 8pm, so when Martin sees it’s 8:14, he begins to sip water. And when his family finds out about his little experiment, he owns up to it and addresses his actions humbly. This doesn’t sound like an alcoholic’s behaviour because an alcoholic would rarely admit what s/he’s doing and why it’s wrong. With these comparisons, Vinterberg lends the viewers the “eyes” of the nature so we can observe the miniaturised alcoholic world where natural selection decides who becomes an alcoholic and who gets to exploit the liquor’s good qualities.

In reality, however, one doesn’t have the eyes of the nature. And it remains unknown whether one’s destined to be an alcoholic. So, we should often examine the side of the bridge we’re approaching. Drink responsibly during the holidays!