To say Joe and Anthony Russo have reshaped the landscape of cinema would be an understatement. After successfully redeeming the latter two-thirds of the “Captain America” ​​trilogy in the Marvel Cinematic Universe, the Russo brothers went on to direct the 4th and 2nd highest-grossing films of all time respectively with “Avengers: Infinity War” and “Avengers: Endgame”. Despite not being much of a fan of the Marvel Cinematic Universe, the work the Russos have done easily ranks among my favorite for the entire MCU. Their mixture of clear vision, mixed with obvious care for action choreography and smart balancing of humorous and dramatic moments, made “Captain America: Civil War” and “Avengers: Infinity War”, especially stand out as entries in the overcrowded superhero genre with genuine personality and impressive filmmaking. Having worked in the Marvel bubble for 5 years straight, the idea of ​​a smaller-scale drama seemed like a perfect route to take after making arguably the most ambitious and wide-spanning film ever made.

With so much clout in Hollywood, Joe and Anthony had $40 million to make whatever they wanted, with full creative control and an entire Awards season push. Their own production company ABGO bought out the production rights to the semi-autobiographical novel from Nico Walker in the summer of 2018. Walker was in prison at the time of writing the novel, for bank robbery. Making a film adaptation of the story of a heroin-addicted US Army veteran with PTSD who robs banks to fund his addiction seems like a great idea on paper, and with two of the biggest directors in Hollywood at the helm and the fantastic actor Tom Holland at the forefront, it seemed as everything should go according to plan. The trailers were great, and the Oscar buzz was rising as the release date crept forward. So what could go wrong? Well, almost everything. 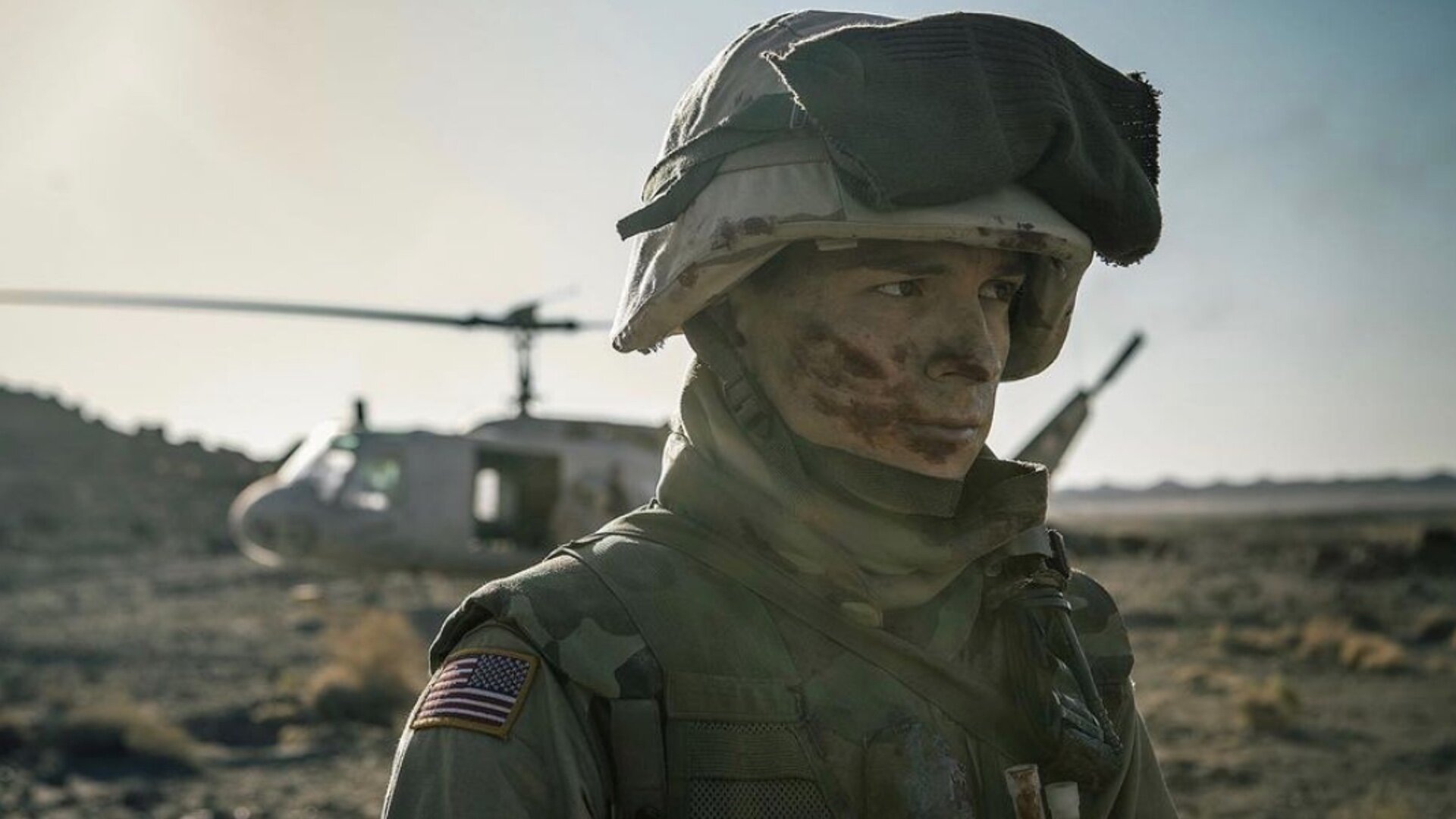 It is rare to see such a colossal failure of such size and ambition as “Cherry”. A film that refuses to commit to being any one thing, and therefore manifests to nothing. A film that treats the audience like children, despite so desperately wanting to be dark and brutal. This is a film with a full 141 minutes of runtime, and almost every single moment is drowned out with music or narration. This is perhaps the most unfitting narration I have seen in a film since John Travolta and Fred Durst’s “The Fanatic”, and I mean that with full sincerity. “Cherry” tries so incredibly hard to have such a vibrant personality to mask the laughable and jumbled screenplay that it capsizes almost any moment of genuine emotion or impressive filmmaking. The Russo brothers implement the most irritating and headache-inducing form of visual storytelling to differentiate between each chapter. Shot between a mixture of several different lenses and cameras, cinematographer Newton Thomas Sigel is doing backflips trying to imbue this film with any sense of meaning or purpose. And to his credit, there are parts of this film that are incredibly well-shot.

There are several very impressive camera movements with lots of coordination between actors, and the best scene of the entire film has an absolutely breathtaking one-take through an active battlefield in Iraq. This scene that takes place at the beginning of the third chapter does an amazing job capturing the chaos and horror of war, and combined with fantastic practical effects and production design during this sequence makes this quite a phenomenal moment in the film. There are also many very well-framed shots, and many scenes are very nice-looking with some great lighting and creative angles. But the double-edged sword with the visuals is that, while at times very impressive on a technical level, are completely empty and vapid. They are there to add a drowning heap of frosting to a bland, dry, disgusting piece of cake. 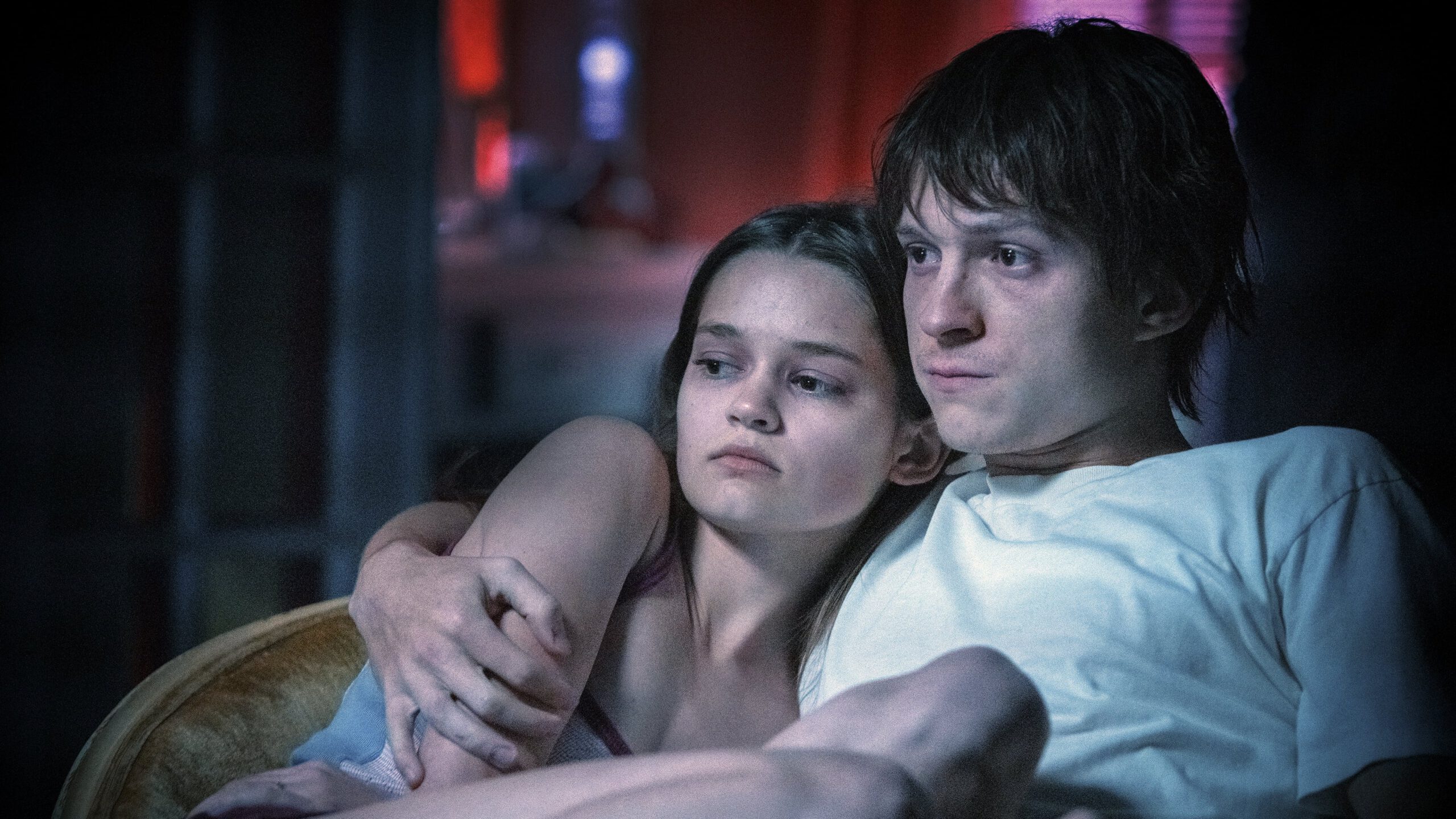 As aforementioned, the script is just downright terrible, with horrendous dialogue, terribly written narration, humor that falls completely flat, emotional beats that are completely laughable, and with logic thrown out the window at every possible opportunity. There is also an incredibly glaring issue with the representation of people of color in this film. Every person who is not white is either a terrible person, a victim, or a comic relief. At a certain point in the film, it starts to feel entirely intentional. For a film so obsessed with showing trauma, things like sexual assault, violent outbursts from side characters, and entire emotional arcs are almost played for laughs. The music is not even bad at all on its own, but it is so incredibly overused and unfitting. There is a specific piece from the original score that is pretty fantastic and used very well, but it doesn’t help the fact that it is overshadowed by the rest of the unfitting music.

Tom Holland’s performance was pretty phenomenal overall, and you can tell just how much he transformed himself for this role, but he is working with such terrible dialogue that his performance isn’t able to be enjoyed to its full potential. Ciara Bravo was also good overall, even if she was a bit inconsistent because of just how bad some of her dialogue is. The chemistry between the two of them is one of the only redeemable qualities of the film, despite just how unlikable their characters are. The one other thing I can very much so commend the film for is the great sound mixing. The war scenes especially have a lot of very well-executed audio, and there is a specific choice to have Ciara Bravo’s character sound like she is speaking through the perspective of how Tom Holland’s character hears her through the phone while she is talking on-screen during phone conversations that was a really great artistic decision.

The supporting characters were unbearable, the tongue-in-cheek production design choices with the names of characters and locations were incredibly annoying, and by the end of the film, I was so incredibly unsatisfied with almost everything about it. The Russos are obviously heavily inspired by films like “Goodfellas” and “Full Metal Jacket”, but seem to lack any understanding of why those films work as well as they do. There are individual moments that work very well, and the one war scene that was particularly fantastic really helped the film, but every great moment or aspect is swamped and concentrated down by the fundamental basics of storytelling being so poorly executed. Check this film out for a fantastic Tom Holland performance, but don’t be surprised when you are incredibly disappointed by almost every other aspect.